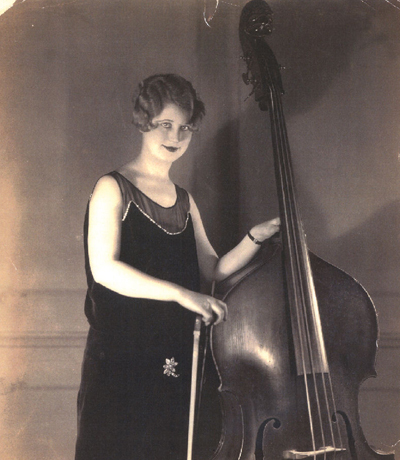 Thelma Terry, double bass player and band leader; she held her bass with a firm understanding of its abilities. She stepped into a recording studio only twice that we know of. The first time, March 29th, 1928 with six horn players and a rhythm section that included a 20 year old Gene Krupa. This band recorded a total of four songs that day, all with solid arrangements. Thelma’s second session was with an entirely different band in New York City six months later, September 27, just three days shy of her 27th Birthday. The six songs recorded at those two sessions are the only known audio artifacts we have of her playing and still she is held in high regard amongst jazz and slap players that have uncovered her records.

Thelma started playing bass after her family moved from rural Michigan to Chicago. Her sewing skills got her a job as a seamstress for a wealthy Chicago family that were members of the cultural and musically supportive Chautauqua society. She chose to learn upright bass and joined the Chautauqua Circuit on the road all over the country while still a teenager. Eventually she auditioned for and got the first chair position in the Chicago Woman’s Symphony Orchestra under the direction of Elena Moneak (who would later be a theremin performer extraordinaire!). This all woman symphony was highly respected and could have taught Thelma a great deal about her instrument and music theory in general. She was playing Chicago nightclubs like The Lighthouse and the infamous Lincoln Taverns for a couple years until she started leading her own band, the all woman Thelma Combes’ Volcanic Orchestra, in 1924. By 1925 she is a featured vocalist and bass player with the house band at Colosimo’s Restaurant, a den of Chicago’s underworld elite. Associating with Al Capone and his men didn’t seem to bother Thelma, he made sure she got home safe after a long night of work. Her playing was heard over the radio waves on WBBM while in the band at The Vanity Fair Cafe with the great banjoist Eddie Condon playing “Could I, I Certainly Could” and other popular numbers of the time. Regular work in Chicago area theaters kept her busy until she got hired by Bill Stein at MCA to put together a touring band, Thelma Terry and Her Playboys. Her band once shared a bill with the great Jelly Roll Morton and His Red Hot Peppers in Rochester, NY. Thelma’s band got top billing.

Along with the great Bill Johnson (The Original Creole Orchestra and leader on his own sessions) and Steve Brown (New Orleans Rhythm Kings, Goldkette’s Orchestra, Paul Whiteman’s Orchestra), Thelma would be a younger sibling to said first generation offspring in style and in technique, similarly to the legendary Pops Foster. In fact, Thelma would join other Chicago jazz musicians in frequenting the South Side Chicago stomping grounds of Bill Johnson and his pals when they were playing around town. Like Johnson and Brown, Terry kept the band bouncing along by combining two beat pulses, quarter note arpeggios, and solid, double and triple slaps. Thelma was leading and swinging her band in a joyful and danceable fashion. Her rhythm work with Gene Krupa from her first session makes for amazing results. Their conjoined slaps and snare drum accents are a rhythmic delight. Each of Thelma’s recordings has amazing moments of double or triple slaps following the melody to wonderful effect. Thelma also plays the melody figures in tandem with the horn section when called for. Her bass lines push the whole band and keep the lively bounce always in stride. The January 1929 copy of the English Gramophone Magazine reviews Thelma’s playing on an exported coupling of Lady of Havana and Voice of the Southland as such:

“…in many ways, the best record I have heard. Now I most sincerely hope that this record will be the beginning of a complete change-over from tubaphone to double-bass to provide the foundation of every dance band. Thelma Terry who plays that instrument herself in this record, has shown us the endless scope which the string bass has in the dance band.”

Upon hearing one of Thelma’s recording, most bass players will be first amazed by her marvelous tone and then by her fabulously enjoyable playing. Her initial session had her bass placed up front and center of the band with the full breadth of her bass playing well within range of the recording microphone. She is featured so strongly in this session that I think it almost sounds like a happy accident in the studio. To me, the effect is a rare opportunity to practically hear what the band sounded like from Thelma’s perspective. Each note rings clear and each slap on the bass might as well be across the face! At Thelma’s second session in September of 1928, the band’s mix is much more even and, although her bass playing is still jolly and productive, she is no longer the star feature. Instead, we are treated to pleasantly arranged popular vocal selections sung by Warren Smith and Joe Davis (the latter to be instrumental in the career of 1940’s Doo Wop/R&B stars, The Five Red Caps). These are Thelma’s last recordings and, as such, we are only left with a desire for more. She gave up the band leader gig, married a night club owner, and settled down in Savannah, Georgia. She made a try at a comeback in the 50’s but didn’t encounter much success. I spoke with Thelma’s daughter, Patti Falkner, and she told me that at one point her mother “sold her bass ’cause she needed the money.” So, there’s little hope in finding that artifact on ebay any time soon. Her records, however, are not so rare and her entire six song catalog has been made available for our listening thrill. My personal favorite, Mama’s Gone, Goodbye, might be a good place to start.

THELMA TERRY AND HER PLAY BOYS

The Voice Of The Southland – Columbia 1390-D

Credit to Dave Apolloni for his great work in researching Thelma Terry’s story.