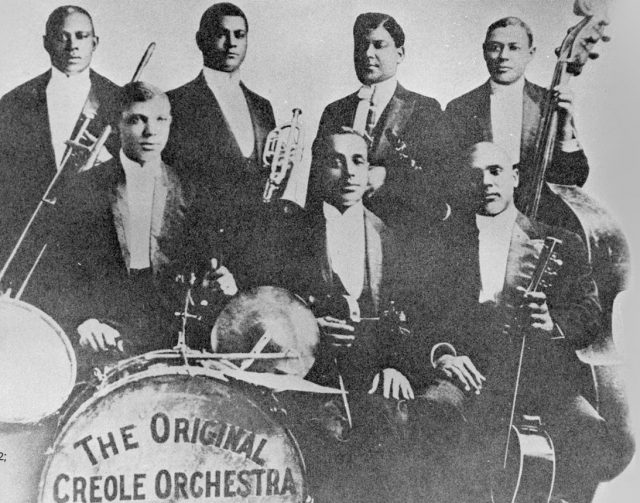 Bill Johnson was one of the first and most prominent exponents of slap bass in American music. He was born today (August 10) in 1872 … or 1874 … or other years through 1880 (documentation can be argued for many different years). In any case, Johnson led a very long life that spanned so much of jazz history. He was there before there was a word for the genre, let alone any curious academic definition for it. His first gigs were on guitar at age 15 with a string trio in a sporting house; he was playing string bass by 1900.

In the early 1900’s, Johnson was the manager and co-founder of The Original Creole Orchestra, a rather important group in the spread of jazz throughout the U.S. from New Orleans. By 1911, the band was in Los Angeles; through the latter half of the teens they toured a vaudeville circuit before landing in Chicago. In 1918, the band parted ways leaving Johnson to re-organize with a handful of New Orleans expats (Joe Oliver, Jimmy Noone). The next evolution of the Creole Orchestra became King Oliver’s Creole Band. The rest, as they say, is history.

We’re lucky to have a decent amount of recorded examples of Bill Johnson’s handiwork. If you’re willing to do some digging, there are over eighty sides credited to him (according to the Lord discography); many of those with Johnny Dodds, Tampa Red, Jimmy Blythe, and Junie Cobb, among others. There are even two under his own name (Bill Johnson’s Louisiana Jug Band).

Check out Dust to Digital’s “How Low Can You Go?” compilation! The third disc is entirely dedicated to our man. https://www.dust-digital.com/bass/

Given his lifespan, Bill Johnson’s playing is a great illustration of early jazz bass and its different facets. It’s also a perfect example of how technique, style, and expression don’t end with an era but fluidly flow and integrate from one chapter to the next. Throughout his recorded output, he sometimes slaps simple quartet note lines throughout the entire side; in other cases, he alters his rhythmic expressions from from halves to quarters to eighths to triplets or any combination that strikes his fancy, rarely walking a steady quarter pulse for much longer than a bar or two. It’s also important to note that he switches back and forth between slap and arco frequently, providing different textures and dynamics for the mood to the tune and further illustrating his connection and presence through the pre-jazz and early jazz eras.

Johnson’s unique style, forged through the formative years of jazz, provided raucous excitement on any side he recorded.

Like many other early slap bassists in jazz, Bill Johnson’s more complex rhythmic expressions aren’t executed with the dropping of his hand on the fingerboard but simply pulling the string in quarters, eighths, or triplets. In doing so, he set a firm example for so many bassists following him: powerful command and propulsion of the beat. Milt Hinton lauded Johnson as the loudest bassist around with a sound that could be heard from a Chicago city block’s distance.

Though Bill Johnson’s last recording dates were in 1929, he continued performing through the early 1950s while running a few side hustles (restaurant, billiard hall). He strongly contributed not only to the formative years of jazz but to spirit and technique of slap bass in American music. Unfortunately for so many, his music isn’t quite as well known and almost entirely absent from academic awareness. Thankfully, we have a great opportunity here at The Art of Slap Bass to spend some time celebrating this slap bass great!

Have a listen to these sides but don’t stop here. There are plenty more to enjoy.

Happy Birthday, Bill Johnson! Thanks for all the great music!